Part I begins with Ivan's coronation as Tsar of all the Russias, amid grumbling from the boyars. Ivan makes a speech proclaiming his intent to unite and protect Russia against the foreign armies outside her borders and the enemies within - a reference to the boyars, who are already seen as discontented with his coronation. Shortly after, the scene changes to Ivan's wedding celebration in which he marries Anastasia Romanovna. This causes him to lose the friendship of his two best friends, Prince Andrei Kurbsky and Fyodor Kolychev. The latter receives Ivan's permission to retire to a monastery, while Kurbsky attempts to resume his romance with the Tsarina, who repels his advances.
The marriage feast is interrupted by news of the burning of several boyar palaces, carried into the Tsar's palace by a mob of the common people who also complain that the Tsar is being led astray by the Tsarina's family (the Romanovs), the Glinskys and the Zakharins. Ivan calms the crowd, but is interrupted by envoys from the khanate of Kazan, who send him a ceremonial knife with the suggestion that he do himself a favor by using it to commit suicide. Ivan immediately proclaims that his kingdom is at war with Kazan.
The next scene shows the siege of Kazan, in which Ivan's army digs saps underneath the city and fills them with gunpowder. Kurbsky, nominally in command, is reprimanded by Ivan for senseless brutality (he ties Tartar prisoners to palisades within earshot of the walls of Kazan and tells them to shout to the city to surrender; the defending archers immediately shoot the prisoners). The city of Kazan falls to the Russian army.
During his return from Kazan, Ivan falls seriously ill and is thought to be on his deathbed; Orthodox priests come to give him the last rites before he dies. Ivan sends for his relatives and orders them to swear allegiance to his son, the infant Dmitri, reminding them of the need for a single ruler to keep Russia united. They demur, with Ivan's aunt, Efrosinia Staritska, openly urging the others to swear allegiance to her son, Vladimir, instead. Emotionally overwrought, Ivan collapses and is thought dead. The relatives, celebrating, all begin to swear allegiance to Vladimir, the "boyar tsar" they have hoped for; meanwhile, Kurbsky is uncertain of his own loyalty, trying to decide between the two sides. However, when the Tsarina says, "Do not bury a man before he is dead," Kurbsky realizes that Ivan is still alive, and hurriedly swears his allegiance to Ivan's infant son, Dmitri. He is sent, as a reward, to the western border of the kingdom to defend against the Livonians and Poles. At the same time, Ivan dispatches Alexei Basmanov, a commoner he sympathizes with, to the south to take care of the Crimean border.
The Tsarina now falls ill, and while Ivan is receiving bad news from all fronts, the boyars plot to kill her. Efrosinia comes into the palace with a cup of wine hidden in her robes, in which she has put poison. Just as the royal couple receive word that Kurbsky has defected to the Livonians, Efrosinia slips the cup of wine into the room and listens from behind a wall. The Tsarina has a convulsion and Ivan, looking around for a drink to calm her, takes the poisoned wine and gives it to her.
The scene changes to show the dead Tsarina lying in state in the cathedral, with Ivan mourning beside her bier. While a monk reads biblical verses over the body, Ivan questions his own justifications and ability to rule, wondering if his wife's death is God's punishment on him. However, he pulls himself out of it, and sends for Kolychev. At this point, Alexei Basmanov arrives, suggesting that Ivan surround himself with men he can trust - "iron men," the Oprichnina - and offers his (rather startled) son, Fyodor, for service. Ivan accepts, and sets about recouping his losses. He abdicates and leaves Moscow, waiting until the people beg him to return, saying that he now rules with absolute power by the will of the people.

Part II opens in the court of King Sigismund of Poland, to whom Kurbsky swears allegiance. Sigismund promises to make Kurbsky ruler of Ivan's territories, once he exploits the tsar's absence by conquering them. The plan is foiled when an emissary announces that Ivan has returned to Moscow.
Ivan begins by reforming the land distribution: he takes the boyars' lands, then reinstalls them as managers, increasing his own power at their expense. His friend, Kolychev, arrives, now the monk Philip; after a heated debate, Philip agrees to become metropolitan of Moscow, if Ivan gives him the right to intercede for condemned men. This is mutually agreed upon. But as soon as it is settled, Ivan, propelled by Malyuta, finds a way around this: he executes condemned men quickly, before Philip can use his right. In this way he has three of Philip's kinsmen executed.
Fyodor Basmanov, the first of the Oprichniki, helps Ivan figure out that the Tsarina was poisoned, and both suspect Efrosinia of poisoning the cup of wine. Ivan orders Fyodor not to say anything about it until he (Ivan) is certain beyond doubt of her guilt.
The boyars, close to desperation, plead their case to Philip and eventually win him over. He vows to block Ivan's abuse of power, and confronts him in the cathedral while a miracle play is being presented. As the argument heats up, Ivan, angry, proclaims that he will be exactly what the boyars call him - terrible - and has Philip seized. The boyars now decide that their only option is to assassinate Ivan, and the novice Pyotr is selected to wield the knife.
Ivan, now certain of Evrosinia's guilt, invites Vladimir to a banquet with the Oprichniki. Ivan gets Vladimir drunk while the Oprichniki sing and dance around them; Vladimir mentions that there is a plot to kill Ivan, and he (Vladimir) is to replace him as Tsar. Fyodor Basmanov notices the assassin leaving, and signals Ivan, who, pretending surprise at Vladimir's revelation, suggests Vladimir try being Tsar for a while, and has the Oprichniki bring throne, orb, scepter, crown and royal robes, and they all bow down to "Tsar Vladimir." Then Ivan tells Vladimir to lead them to the cathedral in prayer, as a Tsar should lead. Hesitantly, Vladimir does.
In the cathedral, the assassin runs up and stabs the mock Tsar, and is immediately seized by Fyodor and Malyuta. Ivan orders them to release Pyotr, and thanks him for killing the tsar's worst enemy. Efrosinia arrives, jubilant at the apparent death of Ivan, until she sees Ivan alive; rolling the corpse over, she realizes it is her own son. Ivan sentences her and then relaxes, proclaiming that all his enemies within Moscow are vanquished and he can turn to those outside. 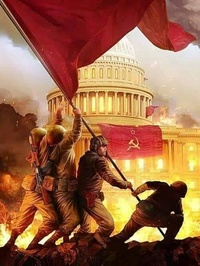